American Elements manufactures Copper Chlorate in both research and bulk quantities. American Elements produces materials to many standard grades when applicable including Mil Spec (military grade), ACS, Reagent and Technical Grades; Food, Agricultural and Pharmaceutical Grades, Optical, Semiconductor, and Electronics Grades, and follows applicable USP, EP/BP, and ASTM testing standards. Most materials can be produced in high and ultra high purity forms (99%, 99.9%, 99.99%, 99.999%, and higher). Standard and custom packaging is available. Additional technical, research and safety (SDS) information is available. Please request a quote above to receive pricing information based on your specifications.

Human and soil exposure during mechanical chlorpyrifos, myclobutanil and copper oxychloride application in a peach orchard in Argentina.

Asymmetric copper-catalyzed conjugate additions of organometallic reagents in the syntheses of natural compounds and pharmaceuticals. 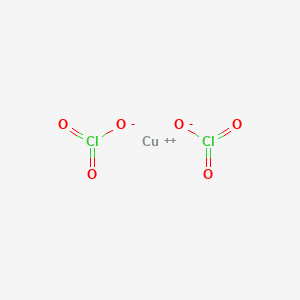