Dysprosium 2-Ethylhexanoate is a Dysprosium source that is soluble in organic solvents as an organometallic compound (also known as metalorganic, organo-inorganic and metallo-organic

compounds) as an organometallic compound (also known as metalorganic, organo-inorganic and metallo-organic compounds). Ethylhexanoates are carboxylates with many commercial applications. They are commonly used in various catalysts for oxidation, hydrogenation and polymerization and as an adhesion promoter. It is generally immediately available in most volumes. Ultra high purity and high purity forms may be considered. Dysprosium 2-Ethylhexanoate is one of numerous organo-metallic compounds (also known as metalorganic, organo-inorganic and metallo-organic compounds) sold by American Elements under the trade name AE Organo-Metallics™ for uses requiring non-aqueous solubility such as recent solar energy and water treatment applications. Similar results can sometimes also be achieved with Nanoparticles and by thin film deposition. Note American Elements additionally supplies many materials as solutions. American Elements produces to many standard grades when applicable, including Mil Spec (military grade); ACS, Reagent and Technical Grade; Food, Agricultural and Pharmaceutical Grade; Optical Grade, USP and EP/BP (European Pharmacopoeia/British Pharmacopoeia) and follows applicable ASTM testing standards. Typical and custom packaging is available. Additional technical, research and safety (MSDS) information is available as is a Reference Calculator for converting relevant units of measurement.

The number of electrons in each of dysprosium's shells is [2, 8, 18, 28, 8, 2] and its electron configuration is [Xe]4f10 6s2. The dysprosium atom has an atomic radius of 178 pm and a Van der Waals radius of 229 pm. Dysprosium was first discovered by Paul Emile Lecoq de Boisbaudran in 1886. In its elemental form, dysprosium has a silvery-white appearance.

"Switching on" the single-molecule magnet properties within a series of dinuclear cobalt(iii)-dysprosium(iii) 2-pyridyloximate complexes. 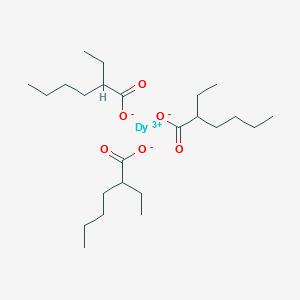