Gallium 69 Sesquioxide (Gallium-69) is a stable (non-radioactive) isotope of Gallium. It is both naturally occurring and produced by fission. Gallium 69 Sesquioxide is one of over 250 stable isotopes produced by American Elements for biological and biomedical labeling, as target materials and other applications. Gallium Sesquioxide is also available in ultra high purity and as nanoparticles. Gallium Sesquioxide 69 isotopic material is generally immediately available. American Elements produces to many standard grades when applicable, including Mil Spec (military grade); ACS, Reagent and Technical Grade; Food, Agricultural and Pharmaceutical Grade; Optical Grade, USP and EP/BP (European Pharmacopoeia/British Pharmacopoeia) and follows applicable ASTM testing standards. Typical and custom packaging is available. Additional technical, research and safety (MSDS) information is available as is a Reference Calculator for converting relevant units of measurement.

A Comparative 68Ga-Citrate and 68Ga-Chloride PET/CT Imaging of Osteomyelitis in the Rat Tibia.

Potential of Gallium as an Antifungal Agent.

The role of Thallium-201 scintigraphy and Tc-99m pentavalent dimercaptosuccinic acid in diagnosis and grading of chondrosarcoma.

Gallium as an Antibacterial Agent: A DFT/SMD Study of the Ga/Fe Competition for Binding Bacterial Siderophores. 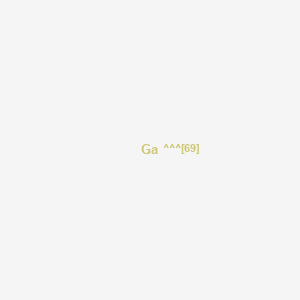