215-301-4
View the history of American Elements on Wikipedia

Manganese Glycerophosphate is one of numerous organometallic compounds manufactured by American Elements under the trade name AE Organometallics™. Organometallics are useful reagents, catalysts, and precursor materials with applications in thin film deposition, industrial chemistry, pharmaceuticals, LED manufacturing, and others. American Elements supplies organometallic compounds in most volumes including bulk quantities and also can produce materials to customer specifications. Please request a quote above for more information on pricing and lead time.

An azine based sensor for selective detection of Cu2+ ions and its copper complex for sensing of phosphate ions in physiological conditions and in living cells.

A facile approach to fabricate an immobilized-phosphate zirconium-based metal-organic framework composite (UiO-66-P) and its activity in the adsorption and separation of organic dyes. 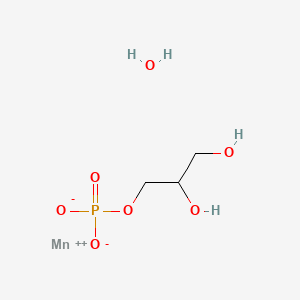