Nickel Magnesium Iron Cerium is one of numerous high purity rare earth alloys manufactured by American Elements. As a master alloy, NiMgFeCe can be used for grain refining, hardening, and improving alloy performance by enhancing properties such as ductility and machinability. Available alloy forms include sheets and plates, discs, foils, rods, tubes, and other shapes. American Elements can produce nickel-magnesium-iron-cerium alloy in various standard ratios of Ni:Mg:Fe:Ce; custom alloy compositions are also available. Advanced chemical analysis is available for all alloy products by best demonstrated techniques including X-ray fluorescence (XRF), glow discharge mass spectrometry (GDMS), and inert gas fusion. Please request a quote above to receive pricing information based on your specifications for alloy composition and form.

Synthesis of cerium and nickel doped titanium nanofibers for hydrolysis of sodium borohydride.

Efficiencies and mechanisms of ZSM5 zeolites loaded with cerium, iron, or manganese oxides for catalytic ozonation of nitrobenzene in water. 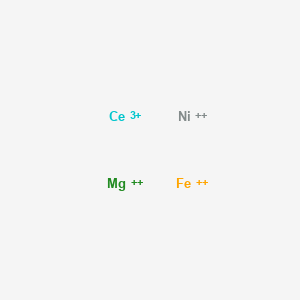