Rubidium is highly reactive, with properties similar to other Group 1 akali metals, e.g., rapid oxidation in air. In its elemental form, rubidium has a gray white appearance. Rubidium is found in the minerals lepidolite, leucite, pollucite, carnallite, and zinnwaldite as well as some potassium minerals. Rubidium was discovered by Robert Bunsen and Gustav Kirchhoff in 1861 and was first isolated by George de Hevesy. The name Rubidium, originates from the Latin word rubidus, meaning "dark or deepest red."

Cation-Induced Dimerization of Crown-Substituted Phthalocyanines by Complexation with Rubidium Nicotinate As Revealed by X-ray Structural Data.

Organometallic rubidium and cesium compounds of the 5,6;11,12-di-o-phenylene-tetracene dianion. 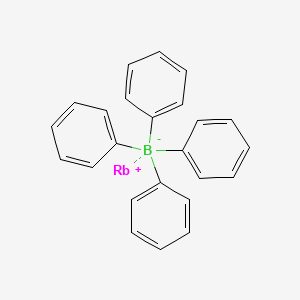