Tin(IV) Sulfate (Stannic Sulfate) is a moderately water and acid soluble Tin source for uses compatible with sulfates. Sulfate compounds are salts or esters of sulfuric acid formed by replacing one or both of the hydrogens with a metal. Most metal sulfate compounds are readily soluble in water for uses such as water treatment, unlike fluorides and oxides which tend to be insoluble. Tin(IV) Sulfate is generally immediately available in most volumes. High purity, submicron and nanopowder forms may be considered. Please request a quote above to receive pricing information based on your specifications. 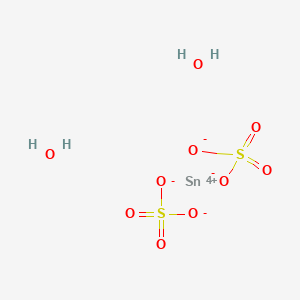