See more Uranium products. Uranium (atomic symbol: U, atomic number: 92) is a Block F, Group 3, Period 7 element. The number of electrons in each of Uranium's shells is 2, 8, 18, 32, 21, 9, 2 and its electronic configuration is [Rn] 5f3 6d1 7s2. In its elemental form uranium's CAS number is 7440-61-1. The uranium atom has a radius of 138.5.pm and its Van der Waals radius is 186.pm. Uranium is harmful both through its radioactivity and chemical toxicity. Uranium in its depleted and unenriched forms has numerous commercial applications due to its great density and its bright yellow-green color in glass and ceramics.

Its great density has found military applications in armor piercing armaments and in protective shielding. It is added to ceramic frits, glazes and to color bars for glass production because of its bright yellow shade. Uranyl Nitrate and Uranyl Acetate are used in medical and analytical laboratories. Uranium was discovered by Martin Heinrich Klaproth. The name Uranium originates from the planet Uranus. Uranium occurs naturally in soil, rock and water and is commercially extracted from uranium-bearing minerals.

Novel structures of two-dimensional tungsten boride and their superconductivity. 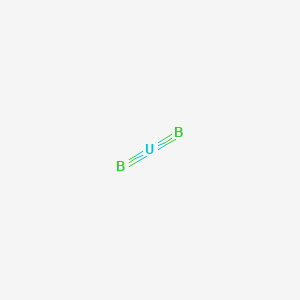