Yttrium Acetylacetonate Hydrate is a Yttrium source that is soluble in organic solvents as an organometallic compound (also known as metalorganic, organo-inorganic and metallo-organic

compounds). The high purity acetylacetonate anion complexes by bonding each oxygen atom to the metallic cation to form a chelate ring; because of this property, acetylacetonates are commonly used in various catalysts and catalytic reagents for organic synthesis, including the fabrication of various shapes of carbon nanostructures (as demonstrated by a 2013 experiment by researchers at the Leibniz Institute for Solid State and Materials Research Dresden) via the use of chemical vapor deposition (CVD) and laser evaporation techniques. Yttrium Acetylacetonate is one of numerous organo-metallic compounds (also known as metalorganic, organo-inorganic and metallo-organic compounds) sold by American Elements under the trade name AE Organo-Metallics™. The numerous commercial applications for Yttrium include ceramics for crucibles for molten reactive metals, in florescent lighting phosphors, computer displays and automotive fuel consumption sensors. Additional technical, research and safety (MSDS) information is available as is a Reference Calculator for converting relevant units of measurement. 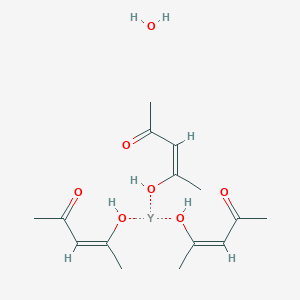