Yttrium Trifluoroacetate Hydrate is one of numerous organo-metallic compounds (also known as metalorganic, organo-inorganic and metallo-organic compounds) sold by American Elements under the trade name AE Organo-MetallicsT. Yttrium Trifluoroacetate Hydrate is generally immediately available in most volumes. High purity, submicron and nanopowder forms may be considered. Typical and custom packaging is available, as is additional research, technical and safety (MSDS) data. Please contact us above for information on specifications, lead time and pricing.

Model-based rationalization of mixture toxicity and accumulation in Triticum aestivum upon concurrent exposure to yttrium, lanthanum, and cerium.

Response of the freshwater mussel, Dreissena polymorpha to sub-lethal concentrations of samarium and yttrium after chronic exposure. 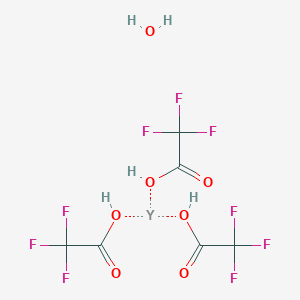