219-535-8
View the history of American Elements on Wikipedia

Barium 2-Ethylhexanoate (or Barium Octoate) is a Barium source that is soluble in organic solvents as an organometallic compound (also known as metalorganic, organo-inorganic and metallo-organic

compounds). Ethylhexanoates are carboxylates with many commercial applications. They are commonly used in various catalysts for oxidation, hydrogenation and polymerization and as an adhesion promoter. Barium 2-Ethylhexanoate is generally immediately available in most volumes. Ultra high purity and high purity forms may be considered. Barium 2-Ethylhexanoate is one of numerous organo-metallic compounds (also known as metalorganic, organo-inorganic and metallo-organic compounds) sold by American Elements under the trade name AE Organo-Metallics™ for uses requiring non-aqueous solubility such as recent solar energy and water treatment applications. Similar results can sometimes also be achieved with Nanoparticles and by thin film deposition. Note American Elements additionally supplies many materials as solutions. The numerous commercial applications for Barium include glass, electronics, medicine, and is also used in paints and colorants. American Elements produces to many standard grades when applicable, including Mil Spec (military grade); ACS, Reagent and Technical Grade; Food, Agricultural and Pharmaceutical Grade; Optical Grade, USP and EP/BP (European Pharmacopoeia/British Pharmacopoeia) and follows applicable ASTM testing standards. Typical and custom packaging is available. Additional technical, research and safety (MSDS) information is available as is a Reference Calculator for converting relevant units of measurement.

In its elemental form, barium is a soft, silvery-gray metal. Industrial applications for barium include acting as a "getter," or unwanted gas remover, for vacuum tubes, and as an additive to steel and cast iron. Barium is also alloyed with silicon and aluminum in load-bearing alloys. The main commercial source of barium is the mineral barite (BaSO4); it does not occur naturally as a free element . The name barium is derived from the Greek word "barys," meaning heavy.

A Modern Twist to a Classic Synthetic Route: Ph3Bi-Based Redox Transmetalation Protolysis (RTP) for the Preparation of Barium Metalorganic Species.

A chromium precursor for the Phillips ethylene trimerization catalyst: (2-ethylhexanoate)2CrOH.

Removal of acetaminophen in water by laccase immobilized in barium alginate. 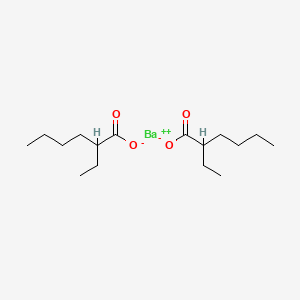