Electronic devices use the manipulation of electron flow within electrical circuits in order to gather information from incoming signals, process and/or transmit that information, and use that information to generate various output signals. In early electronic devices, manipulation of current within a circuit was accomplished using mechanical circuit components and later vacuum tubes, but modern electronics and advanced technologies rely primarily on solid-state electronic components containing semiconductors.

As the term might imply, semiconductors are materials with electrical conductivities between that of a conductor such as copper and an insulator such as glass, but their true value in electronic devices lies in the ability of their conductivity to be easily manipulated. Current conduction in a semiconductor occurs due to the movement of charge carriers: free electrons carry negative charge, while the spaces left behind when electrons move, often termed “holes”, carry positive charge. The inherent electrical properties of a semiconducting material can be manipulated by doping the material with impurities, which greatly increases the number of charge carriers available to conduct a current.

Semiconductor materials may be doped to be intrinsically n-type, having an excess of negative charge carriers, or p-type, having an excess of positive charge carriers. When doped semiconductors contact semiconductors of a different type, charge carriers become depleted in the region of this p-n junction. This depletion region is rectifying: it has the unique property of allowing current to flow only in one direction. This property is absolutely necessary to the operation of diodes and transistors. Additionally, the conductivity of a semiconductor can change on short timescales due to external conditions such as exposure to light or heat, the presence of an electrical or magnetic field, or mechanical deformation of its crystal structure. The effect of electrical fields on semiconductor conductivity is exploited in field-effect transistors, and sensitivity to other inputs allows the production of semiconductor-based sensors and photovoltaic devices.

The electronic circuit components which typically contain semiconductors are transistors and diodes. Diodes are two-terminal electronic components that act to control current within a circuit by only allowing current flow in a single direction, a property provided in semiconductor diodes by a single p-n or metal-semiconductor junction. Additionally, semiconductor diodes only begin conducting electricity if a certain threshold voltage is present, a property that can be tuned through the careful choice of semiconductor materials. These properties can be manipulated to produce a variety of special functions, including the production of light, as in light emitting diodes (LEDs) and laser diodes. 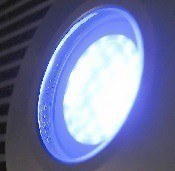 Transistors are three-terminal electronic components that can amplify or switch current within a circuit due to the ability of voltage applied at one of the terminals to alter the current through the remaining pair of terminals. The amplifying abilities of transistors are essential for sound reproduction, radio, transmission, and signal processing, while transistor switches are used in switched-mode power supplies and in logic gates.

The other major class of semiconductor devices is the solar cell, which converts energy from the sun into electricity via the photovoltaic effect, and is one of the major focuses within the field of green technology and alternative energy. For a more detailed discussion about the technology and advanced materials utilized in photvoltaic cells, visit the American Elements Photovoltaic & Solar Energy page.

The group IV elements carbon, silicon, and germanium are all semiconductors in their pure form. The most widely used semiconductor material is crystalline silicon, notable for its useful functional temperature range as well as its abundance and consequent low raw-material cost, and found as the substrate for most integrated circuits as well as in the most widely used photovoltaics. Germanium was widely used in early semiconductor research, and in fact was the material used for the fabrication of the earliest integrated circuits, but its thermal sensitivity and lower abundance make it a less ideal primary material than silicon. Compounds of the group IV semiconductors are also useful semiconductors: silicon germanium (SiGe) is often used for very high-speed semiconductor devices, while silicon carbide is used in blue LEDs and is being investigated for use in semiconductor devices that can withstand extreme environmental conditions during operation. Typically semiconductors are used in crystalline forms, but amorphous silicon finds use in some thin-film solar cells.

III-V semiconductors are binary compounds consisting of an element from group III and an element from group V. Gallium arsenide (GaAs) is the most commonly used semiconductor after silicon, and has some advantages over silicon for use in semiconductor devices: it exhibits higher electron mobility, allowing for the production of higher-frequency devices, and is less sensitive to heat and noise. Gallium arsenide is also superior for use in light-emitting and photovoltaic applications, as its direct bandgap allows it to both absorb and emit light more efficiently than indirect bandgap materials like silicon. Disadvantages of gallium arsenide include low hole mobility, more complex and costly fabrication, and its lack of a native insulating oxide analogous to silicon dioxide, all of which limit its usefulness for fabricating integrated circuits. GaAs is also often used as a substrate for the growth of other III-V semiconductors. The other III-V semiconductors are often found in optoelectronic devices such as infrared detectors and LEDs, or in various devices in conjunction with gallium arsenide.

II-VI semiconductors are binary compounds consisting of an element from group II and an element from group VI. They typically have direct bandgaps and are found most frequently in solar cells, photoresistors, photodetectors, lasers and LEDs. Cadmium telluride (CdTe) solar cells are the most widely used thin-film solar cells. Additionally, aluminum-doped zinc oxide (ZnO:Al) is an important transparent conductive oxide used for conductive films in LCD displays and solar detectors.

Other binary semiconductors outside of these classifications exist, though the above classes are generally the most widely studied. The lead binary semiconductors, which are group IV-VI, could be considered an exception--lead sulfide has a long history of use in infrared detectors, and quantum dots of lead selenide and lead sulfide have recently received significant research interest. Additionally, copper sulfide was used along with cadmium sulfide in some of the earliest thin-film solar cells.

While most oxide compounds used in semiconductor device manufacturing are sought after for their insulating properties, a few notable oxides are used as semiconductors. Copper(I) oxide was one of the first semiconductors researched, and was used to demonstrate many of the basic properties of semiconductor materials. Titanium dioxide is photocatalytic, a useful property with a variety of practical applications. Strontium and barium exhibit pronounced piezoelectric effects: they generate significant amounts of electrical charge when under mechanical stress, which is exploited in pressure and strain sensors, production and detection of sound, electronic frequency generation, and focusing of imaging devices with extremely high resolution, such as electron microscopes and high-end optical devices. Lithium niobate also exhibits piezoelectricity, and is additionally used in various optics applications.

All of the compound semiconductors can be alloyed to form semiconductors containing three (ternary) or four (quaternary) elements. These materials are most notable for their tunable band-gaps which can be precisely manipulated by altering the proportions of the component elements. Ternary compound semiconductors containing gallium are particularly common in LEDs and photovoltaic applications, while compound tellurides are often found in photodetectors, with cadmium zinc telluride (CZT) being useful in the x-ray and gamma-ray range, while mercury cadmium telluride and mercury zinc telluride are widely used in infrared imaging. Additionally, the quaternary semiconductor copper indium gallium selenide (CIGS) is a widely researched material for thin film photovoltaic cells.

While traditionally semiconductor devices have been composed of inorganic materials, in recent years organic electronics has become a major new class of electronic devices. Organic electronics are of interest in part due to their lower material cost compared to traditional electronics, and in part due to unique design possibilities related to the properties of organic semiconductors. Notably, electronic properties of organic molecules are not generally dependent on rigid crystalline structures as is the case for most inorganic semiconductors, which makes flexible and printed electronics more feasible with organic materials. The most widely used organic electronic devices currently are organic light-emitting diodes (OLEDS), which are often incorporated into digital displays, but organic solar cells and transistors are in active development. Both organic small molecules and organic polymers have been used in organic semiconductor devices, and organometallic complexes are common elements in both types of devices.

In integrated circuit manufacturing, diffusion barriers are thin layers of metal or conductive ceramic material used at the interface of two materials to allow electrical conduction between the two but prevent diffusion of one material into another, a common problem when many metals directly contact crystalline semiconductors like silicon.

The production of many semiconductor devices involves the use of various thin film manufacturing processes, many of which can be classified as either chemical or physical vapor deposition techniques.

Chemical vapor deposition (CVD) techniques involve exposing a substrate surface to one or more gas-phase precursors which react on the substrate to form the desired material. These processes allow for precise control of material composition and film thickness, and are commonly used to deposit polysilicon, silicon dioxide, silicon nitride, diamond, some metals and metal silicides, nitrides, oxides, and most compound semiconductors. The precursor compounds used in CVD processes are typically alkylated metals (organometallics), various hydride gases, and metal halides.

In physical vapor deposition (PVD) techniques, the desired material is already present, often in the form of a sputtering target, and is vaporized by various means to be deposited on the workpiece. These techniques are not typically used to deposit semiconductor materials, but instead are most often used to deposit conductive or insulating materials that connect or isolate semiconductor devices within a circuit.

Metals are frequently used as conductors to connect various parts of the circuit.

Transparent conductive oxides are important in electrooptical devices such as sensors and light emitting diodes.

In addition to CVD and PVD techniques, spin coating using sol-gel precursors is often used in semiconductor device manufacturing to deposit oxide layers. The precursors in these processes are typically metal alkoxides.

Quantum dots are nanocrystals made of semiconductor materials, so named because they are small enough to exhibit quantum mechanical properties. The electronic and optical properties of these materials are tunable through altering the size of the crystal. These materials are of interest for traditional semiconductor applications such as transistors, solar cells, LEDs and diode lasers, and additionally have been investigated for use in medical imaging and quantum computing applications.

Below is only a limited selection of the full catalog of semiconductor materials that American Elements manufactures. If you do not see a product you're looking for listed, please search the website or contact customerservice@americanelements.com.