215-700-3
View the history of American Elements on Wikipedia

American Elements specializes in producing high purity Uranium Oxide Shot with the highest possible density and smallest possible average grain sizes for use in semiconductor, Chemical Vapor Deposition (CVD) and Physical Vapor Deposition (PVD) processes including Thermal and Electron Beam (E-Beam) Evaporation, Low Temperature Organic Evaporation, Atomic Layer Deposition (ALD), Metallic-Organic and Chemical Vapor Deposition (MOCVD). Our standard shot sizes range from 1-3mm . We can also provide shot outside this range for ultra high purity thin film applications, such as fuel cells and solar energy layers. Materials are produced using crystallization , solid state and other ultra high purification processes such as sublimation. American Elements specializes in producing custom compositions for commercial and research applications and for new proprietary technologies. American Elements also casts any of the rare earth metals and most other advanced materials into rod, bar or plate form , as well as other machined shapes and through other processes such as nanoparticles and in the form of solutions and organometallics. Uranium Oxide is also available in pellets, pieces, sputtering targets, tablets, and nanopowder(from American Elements' nanoscale production facilities). Other shapes are available by request.

See more Uranium products. Uranium (atomic symbol: U, atomic number: 92) is a Block F, Group 3, Period 7 element. The number of electrons in each of Uranium's shells is 2, 8, 18, 32, 21, 9, 2 and its electronic configuration is [Rn] 5f3 6d1 7s2. In its elemental form uranium's CAS number is 7440-61-1. The uranium atom has a radius of 138.5.pm and its Van der Waals radius is 186.pm. Uranium is harmful both through its radioactivity and chemical toxicity. Uranium in its depleted and unenriched forms has numerous commercial applications due to its great density and its bright yellow-green color in glass and ceramics.

Its great density has found military applications in armor piercing armaments and in protective shielding. It is added to ceramic frits, glazes and to color bars for glass production because of its bright yellow shade. Uranyl Nitrate and Uranyl Acetate are used in medical and analytical laboratories. Uranium was discovered by Martin Heinrich Klaproth. The name Uranium originates from the planet Uranus. Uranium occurs naturally in soil, rock and water and is commercially extracted from uranium-bearing minerals.

What Is the Actual Local Crystalline Structure of Uranium Dioxide, UO2? A New Perspective for the Most Used Nuclear Fuel.

What Is the Actual Local Crystalline Structure of Uranium Dioxide, UO2? A New Perspective for the Most Used Nuclear Fuel.

Accounting for Berkson and Classical Measurement Error in Radon Exposure Using a Bayesian Structural Approach in the Analysis of Lung Cancer Mortality in the French Cohort of Uranium Miners.

Multistage bioassociation of uranium onto an extremely halophilic archaeon revealed by a unique combination of spectroscopic and microscopic techniques.

A Combined Spectroscopic/Molecular Dynamic Study for Investigating a Methyl-Carboxylated PEI as a Potential Uranium Decorporation Agent. 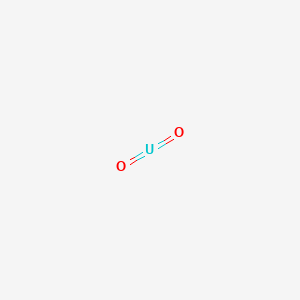