Bis[2-(2-pyridinyl)phenolato]beryllium (also known as Bis(2-(2-hydroxyphenyl)pyridine)beryllium and Bepp2) is one of numerous organometallic compounds manufactured by American Elements under the trade name AE Organometallics™. Organometallics are useful reagents, catalysts, and precursor materials with applications in thin film deposition, industrial chemistry, pharmaceuticals, OLED manufacturing, and others. American Elements supplies organometallic compounds in most volumes including bulk quantities and also can produce materials to customer specifications. Most materials can be produced in high and ultra high purity forms (99%, 99.9%, 99.99%, 99.999%, and higher) and to many standard grades when applicable including Mil Spec (military grade), ACS, Reagent and Technical Grades, Pharmaceutical Grades, Optical, Semiconductor, and Electronics Grades. Please request a quote above for more information on pricing and lead time.

Customers For Bis[2-(2-pyridinyl)phenolato]beryllium Have Also Viewed

The number of electrons in each of Beryllium's shells is [2, 2] and its electron configuration is [He] 2s2. The beryllium atom has a radius of 112 pm and a Van der Waals radius of 153 pm. Beryllium is a relatively rare element in the earth's crust it can be found in minerals such as bertrandite, chrysoberyl, phenakite, and beryl, its most common source for commercial production. Beryllium was discovered by Louis Nicolas Vauquelin in 1797 and first isolated by Friedrich Wöhler and Antoine Bussy in 1828.

In its elemental form, beryllium has a gray metallic appearance. It is a soft metal that is both strong and brittle its low density and high thermal conductivity make it useful for aerospace and military applications. It is also frequently used in X-ray equipment and particle physics. The origin of the name Beryllium comes from the Greek word "beryllos," meaning beryl.

A kinetic comparison between E2P and the E2P-like state induced by a beryllium fluoride complex in the Na,K-ATPase. Interactions with Rb.

An 8-hydroxyquinoline-proline hybrid with multidrug resistance reversal activity and the solution chemistry of its half-sandwich organometallic Ru and Rh complexes.

Asymmetric copper-catalyzed conjugate additions of organometallic reagents in the syntheses of natural compounds and pharmaceuticals. 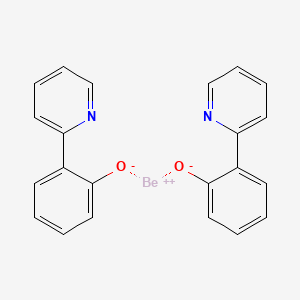