WHOLESALE/SKU 0000-742-255563
CUSTOMER ADVISORY: American Elements does not supply gadolinium for use in ANY form of GBCA (“Gadolinium-Based Contrast Agents”) or for ANY medical, pharmaceutical or nutritional use whatsoever or for the manufacture, testing, or development of ANY such products.

Gadolinium Methoxyethoxide is one of numerous organometallic compounds manufactured by American Elements under the trade name AE Organometallics™. Organometallics are useful reagents, catalysts, and precursor materials with applications in thin film deposition, industrial chemistry, pharmaceuticals, LED manufacturing, and others. American Elements supplies organometallic compounds in most volumes including bulk quantities and also can produce materials to customer specifications. Please request a quote above for more information on pricing and lead time.

The Issue of Gadolinium Retained in Tissues: Insights on the Role of Metal Complex Stability by Comparing Metal Uptake in Murine Tissues Upon the Concomitant Administration of Lanthanum- and Gadolinium-Diethylentriamminopentaacetate.

Trapped Intermediate of a Meerwein-Pondorf-Verley Reduction of Hydroxy Benzaldehyde to a Dialkoxide by Titanium Alkoxides.

Synthesis and Characterization of Alkoxide-Bridged Heterometallic Clusters of Cerium and Copper.

Strontium Isopropoxide: A Highly Active Catalyst for the Ring-Opening Polymerization of Lactide and Various Lactones. 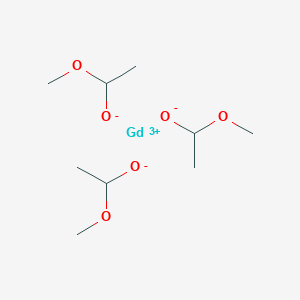