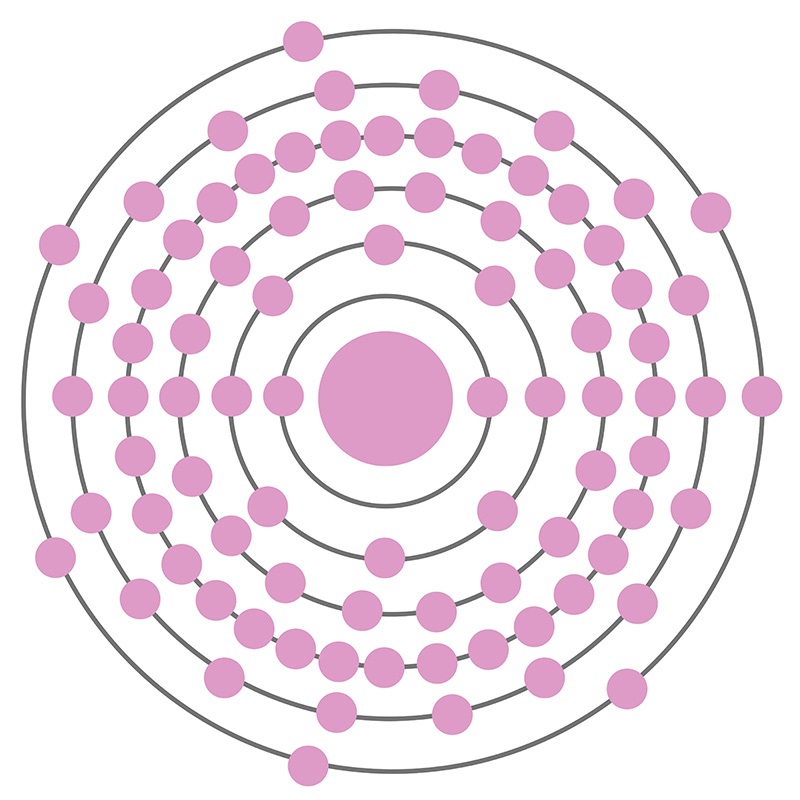 With less than one gram present on earth at any given time, radioactive Astatine is the second rarest naturally-occurring element on the periodic table after berkelium, and the rarest of the non-transuranic elements. Only six of astatine’s 37 known isotopes are naturally occurring; trace amounts of those with atomic numbers 214-219 are produced via decay chains of heavier elements like francium and polonium and/or exist in equilibrium with isotopes of uranium, thorium, and neptunium. Its most stable isotope is 210-At, which has a half-life of 8.1 hours and decays to polonium-210; the least stable is 213-At, which decays to the bismuth-209 after only 125 nanoseconds. Given its quick decay, the element has proven difficult to study. Any quantity of astatine sufficient to constitute a solid would vaporize instantaneously from its radioactive energy, so many of its properties are either unknown or estimated. The element is generally considered to be a member of the halogen family based on observed properties obtained via mass spectrometry and radioactive tracer experiments with dilute astatine solutions; it behaves similarly to iodine, though it is more metallic.

Mendeleev’s periodic table contained a blank spot beneath iodine for a theoretical element named “eka-iodine.” Scientists’ subsequent attempts to find the element in nature were fruitless, and the quest to synthesize it in the lab was fraught with false starts. Fred Allison and his team at Alabama Technical Institute (now Auburn University) were the first in a series of researchers to mistakenly claim discovery of the elusive element in 1931; their discredited “alabamine” was followed by Rajendralal De’s “dakin,” Walter Minder’s “helvetium,” and Mitter and Alice Leigh-Smith’s “anglo-helvetium.” In 1940, Berkeley scientists Dale Corson, Kenneth Ross MacKenzie, and Emilio Segrè were finally successful in artificially producing 211-At by bombarding a bismuth sputtering target with alpha particles in a particle accelerator. They named the element astatine from the Greek astatos, meaning “unstable.” Astatine was the second synthetic element to be conclusively identified, technetium having been discovered by Segrè and Carlo Perrier three years earlier.

Corson, MacKenzie, and Segre’s method is still the primary means of synthesizing 209-211At; the bismuth target is first cooled under nitrogen and then heated to vaporize traces of other radioisotopes, allowing the astatine to be distilled and collected on a cold finger. Several compounds of astatine have been synthesized in microscopic amounts: in addition to hydrogen (hydrogen astatide, HAt, which forms hydroastatic acid when dissolved in water), astatine has been shown to bind to the other halides, silver, sodium, palladium, oxygen, sulfur, selenium, nitrogen, lead, boron, and tellurium, as a colloid. The first ionization energy of the astatine atom was unknown until 2013, when CERN scientists used laser spectroscopy to measure it as 9.31751 electron volts (eV), which was confirmed by Canada's national laboratory for particle and nuclear physics TRIUMF.

Astatine-211 is the element’s only commercially viable isotope, its decay properties making it useful as a short-range radiation source for targeted alpha particle therapy in cancer treatment. Like iodine-113, it preferentially accumulates in the thyroid gland, but it decays faster and emits only alpha particles that have less of a tendency to migrate to surrounding tissue than the beta particles emitted by iodine-113. 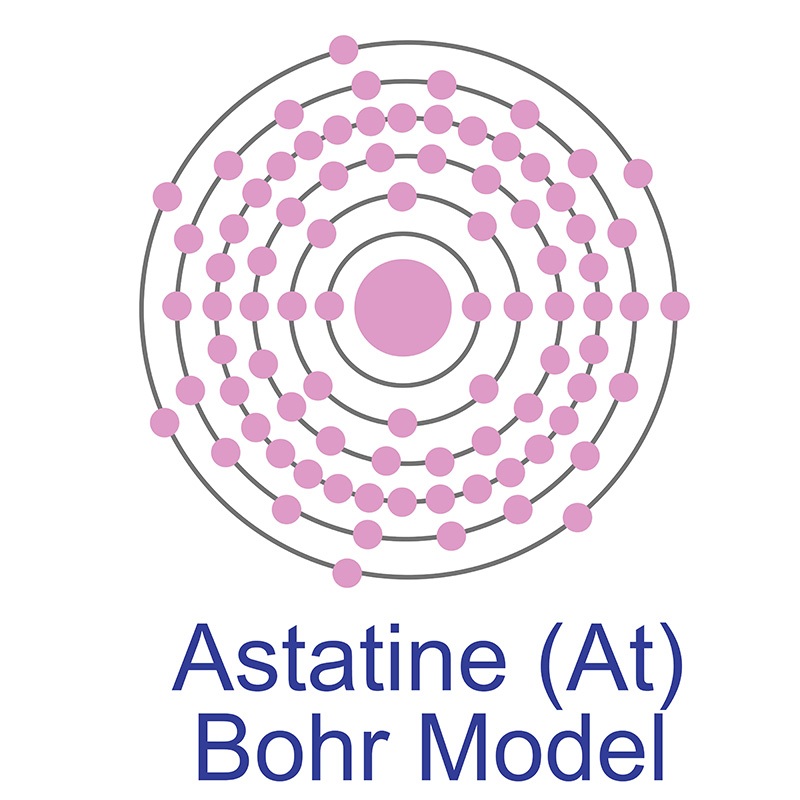 Astatine is a Block P, Group 17, Period 6 element. The number of electrons in each of Astatine's shells is 2, 8, 18, 32, 18, 7 and its electron configuration is [Xe] 4f14 5d10 6s2 6p5. The Astatine atom has a covalent radius of 150.pm and it's Van der Waals radius is 202.pm. In its elemental form, Astatine's CAS number is 7440-68-8 and its appearance is unknown. Astatine is the rarest naturally occurring non-transuranic element. The amount of naturally occurring astatine in the world is about 25g. Astatine was discovered by Dale R. Corson, Kenneth Ross MacKenzie and Emilio Segrè in 1940.

Astatine is highly radioactive. Astatine information, including technical data, safety data, properties, research, applications and other useful facts are specified below. Scientific facts such as the atomic structure, ionization energy, abundance on Earth, conductivity and thermal properties are included.

Astatine (At) has no stable isotopes. The 37 known isotopes of astatine, ranging from 191At to 223At, are radioactive.