Iron Iodate Nanoparticles (or Nanopowders) are generally immediately available in most volumes. American Elements manufactures materials to many standard grades when applicable including Mil Spec (military grade), ACS, Reagent and Technical Grades; Food, Agricultural and Pharmaceutical Grades, Optical, Semiconductor, and Electronics Grades, and follows applicable USP, EP/BP, and ASTM testing standards. Most materials can be produced in high and ultra high purity forms (99%, 99.9%, 99.99%, 99.999%, and higher). Standard and custom packaging is available. Additional technical, research and safety (SDS) information is available. Please request a quote above to receive pricing information based on your specifications.

Iodinated trihalomethane formation during chloramination of iodate-containing waters in the presence of zero valent iron.

Dried powder of corn stalk as a potential biosorbent for the removal of iodate from aqueous solution.

Effect of iodide on transformation of phenolic compounds by nonradical activation of peroxydisulfate in the presence of carbon nanotube: Kinetics, impacting factors, and formation of iodinated aromatic products. 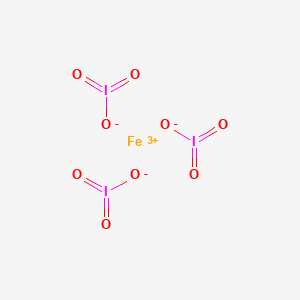