Potassium (3-chlorophenyl)trifluoroborate is one of numerous organo-metallic compounds sold by American Elements under the trade name AE Organo-Metallics™ for uses requiring non-aqueous solubility such as recent solar energy and water treatment applications. Potassium (3-chlorophenyl)trifluoroborate is generally immediately available in most volumes, including bulk quantities. American Elements can produce materials to custom specifications by request, in addition to custom compositions for commercial and research applications and new proprietary technologies. American Elements produces to many standard grades when applicable, including Mil Spec (military grade); ACS, Reagent and Technical Grade; Food, Agricultural and Pharmaceutical Grade; Optical Grade, USP and EP/BP (European Pharmacopoeia/British Pharmacopoeia) and follows applicable ASTM testing standards. Typical and custom packaging is available, as is additional technical and safety (MSDS) data. Please contact us for information on lead time and pricing above. 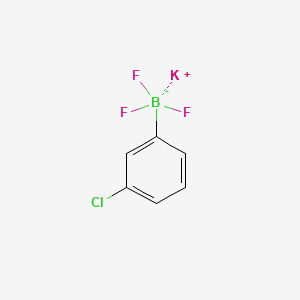