Praseodymium Trifluoromethanesulfonate is one of numerous organo-metallic compounds sold by American Elements under the trade name AE Organo-Metallics™ for uses requiring non-aqueous solubility such as recent solar energy and water treatment applications. Similar results can sometimes also be achieved with Nanoparticles and by thin film deposition. Note American Elements additionally supplies many materials as solutions. Praseodymium Trifluoromethanesulfonate is generally immediately available in most volumes. High purity, submicron and nanopowder forms may be considered. Additional technical, research and safety information is available."

The number of electrons in each of praseodymium's shells is 2, 8, 18, 21, 8, 2 and its electron configuration is [Xe]4f3 6s2. The praseodymium atom has a radius of 182 pm and a Van der Waals radius of 239 pm. Praseodymium resembles the typical trivalent rare earths, however, it will exhibit a +4 state when stabilized in a zirconia host. 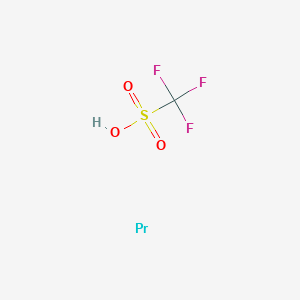