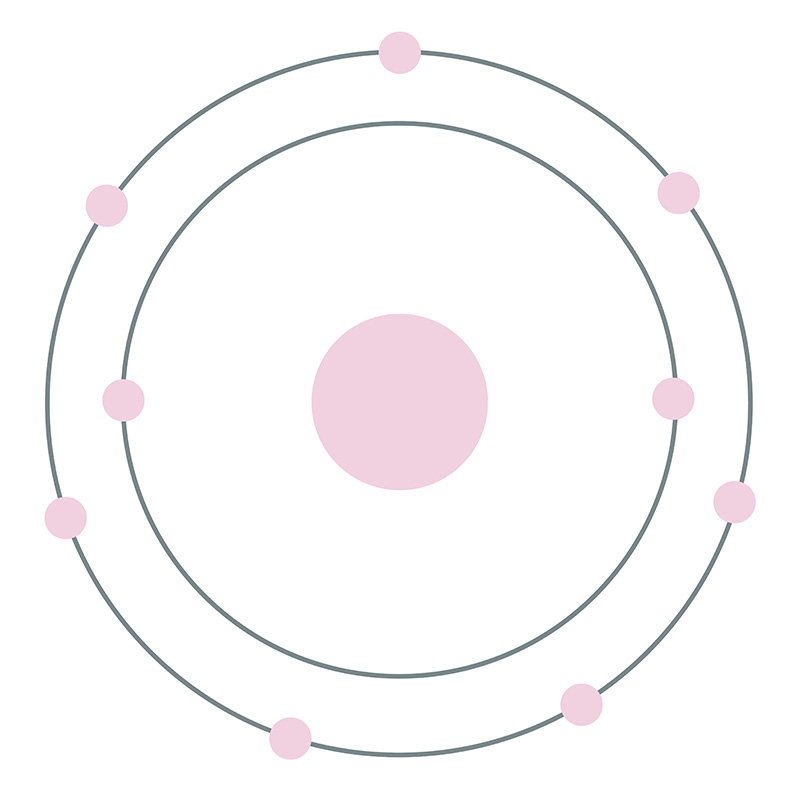 Though its primary ore, fluorite, has long been used in smelting to reduce the melting point of metal ores, fluorine was the last of the halogens to be isolated. Hydrofluoric acid was commonly used as a glass etching agent by the eighteenth century, but it was not until 1810 that Sir Humphry Davy proved that this acid was analogous to hydrochloric acid and therefore must contain an element similar to chlorine. However, the methods used to isolate chlorine were not successful in isolating fluorine, instead resulting only in frustration and sometimes the lethal hydrofluoric acid poisoning of many chemists who attempted to do so. Ferdinand Frederic Henry Moissan finally produced the pure element in 1886 with a method still in use today. The name for the element was derived from that of its ore, which itself had been derived from the latin fluere, meaning “to flow”--a reference to the effect the ore had on molten metal. Moissan was awarded the Nobel Prize in Chemistry for his achievement in 1906.

Fluorine’s earliest function, serving as a flux, remains vital in modern industry. Fluorine compounds are used in this capacity in steelmaking, welding, glassmaking, and in producing some forms of ceramics and cements. Additionally, the fluorine-containing compounds sodium hexafluoroaluminate and aluminum trifluoride are absolutely essential fluxes used in the extraction of aluminum from bauxite. Without the use of these compounds, the temperature required for this process would be too high for aluminum metal to be an economically viable industrial material.

Fluorine is also an important industrial tool in the form of hydrofluoric acid. Though considered a weak acid in dilute solution, as hydrogen and fluorine tend to remain bound rather than dissociating into ions under these conditions, hydrofluoric acid is highly corrosive. Its unusual ability to eat away even at glass led to its first use in glass etching. It is also used to etch the tough ceramics used in dental implants, as this improves the ability of the ceramic to be bound to other materials using adhesives. In steelmaking, hydrofluoric acid often serves as a pickling agent, removing oxides and other impurities on the surface of the metal. Hydrofluoric acid is also used in the production of extremely strong acids known as super acids, and in producing intermediate fluorine compounds used in the production of organochlorines and other fluorine products.

Organofluorine compounds are ubiquitous in modern industry. By volume of production, the most common type of organofluorine compounds are refrigerant gases. These include chlorofluorocarbons (CFCs), hydrochlorofluorocarbons (HCFCs), and hydrofluorocarbons (HFCs). These are used primarily for refrigeration and air conditioning, but are also found as aerosol propellants and solvents. CFCs were the first of these to be used, but were replaced by HCFCs when they were found to cause depletion of the ozone layer. Unfortunately HCFCs still cause ozone depletion, but to a lesser degree. HFCs cause little or no ozone depletion, and are therefore prefered to HCFCs when applicable. Another useful class of organofluorine compounds are the perfluorocarbons (PFCs). PFCs may be used as surfactants, or in the production of fluoropolymers such as Teflon. Teflon and related fluoropolymers are perhaps best known for use in non-stick coatings on cookware, but they are additionally used as insulating wire coating, friction reducing coatings on mechanical parts, and as Gore-Tex, a microporous polymer membrane that finds use in rain-repelling clothing, filters, and packing seals.

Additionally, fluorine-carbon bonds are often used in pharmaceuticals and to make organic agrichemicals such as pesticides more chemically stable. In drug design, this is often necessary because the non-fluorinated compound degrades too quickly in the body to have the desired effect. As such, many common pharmaceuticals are fluorinated, including SSRIs, quinolone antibiotics, and many steroids and anesthetics. However, the stability of organofluorine compounds is not always positive--these compounds tend to persist in the environment and to bioaccumulate. As many organofluorine agrichemicals and some common industrial organofluorines are toxic, this is a significant environmental concern.

Fluorine has a few other major uses in medicine. The isotope fluorine-18 is used as a tracer in positron emission tomography (PET). This type of medical imaging detects relative concentrations of a radioisotope that has been chemically bound to a biologically active molecule, most often glucose, to trace the accumulation of said compound in various body tissues. Glucose is used because more metabolically active areas of the body consume more glucose. In the brain, this is used to monitor which areas are most active, while in whole body scans this is typically used to detect cancer cells, which consume glucose at a disproportionately high rate compared to surrounding tissue. Additionally, fluoride compounds are used in toothpaste and added to drinking water, as the fluorine reacts with and hardens tooth enamel, reducing rates of cavities.

As the early chemists who worked with fluorine quickly learned, its unique properties present significant difficulties and dangers. Fluorine-fluorine bonds are relatively weak, while the bonds between it and other elements are usually very strong, due to fluorine’s high electronegativity; this combination makes fluorine gas extraordinarily reactive. It is corrosive to substances usually considered profoundly inert, including glass, and is therefore stored only in containers made from metals that acquire a passivating metal-fluorine compound coating upon contact with the gas--typically nickel or nickel-alloys. Hydrofluoric acid causes both severe burns and poisoning upon exposure, the latter occurring as it easily diffuses through skin and the fluorine quickly binds with essential ions. However, despite the risks and difficulties inherent to working with fluorine and some of its compounds, it remains a powerful chemical tool, and component of vital materials.

Fluorine is produced directly from the calcium fluoride mineral fluorite, sometimes also known as fluorspar. Lower grade deposits, termed “metspar”, are typically used directly in flux applications, while higher grade deposits known as “acid spar” are treated with sulfuric acid to produce hydrofluoric acid. This acid is then used in the production of virtually all other fluorine compounds. For the few applications in which elemental fluorine is required, it is still prepared via the original method devised in the nineteenth century: the electrolysis of a mixture of hydrogen fluoride and potassium fluoride, the latter being added to allow the mixture to conduct electricity. Additionally, fluorosilicic acid is a byproduct of phosphoric acid production, and this compound is increasingly being recovered as a secondary fluorine source.

Fluorine is a Block P, Group 17, Period 2 element. Its electron configuration is [He]2s22p5. The fluorine atom has a covalent radius of 64 pm and its Van der Waals radius is 135 pm. In its elemental form, CAS 7782-41-4, fluorine gas has a pale yellow appearance. Fluorine was discovered by André-Marie Ampère in 1810. 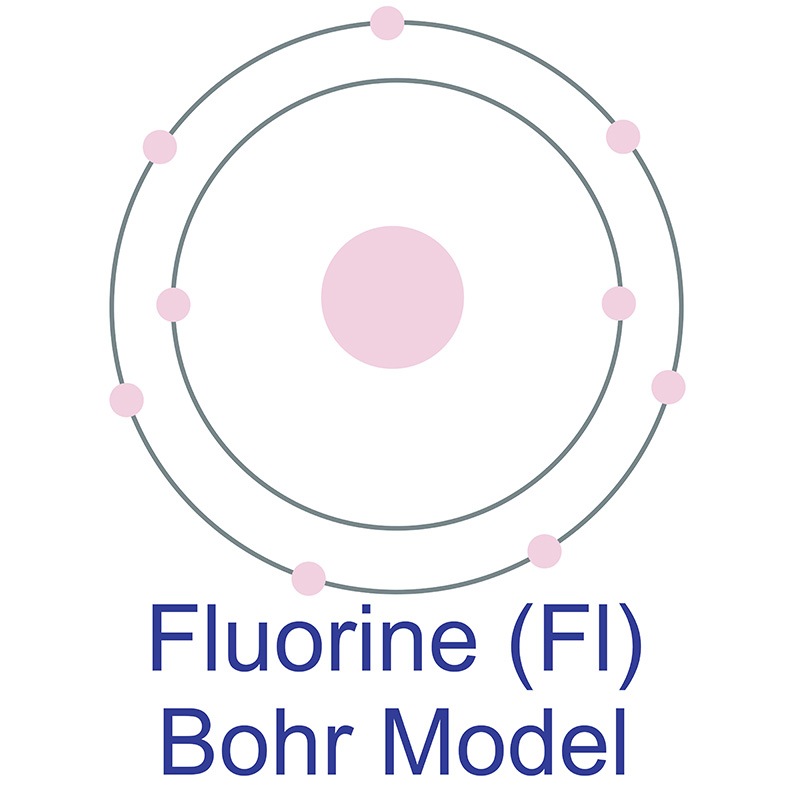 It was first isolated by Henri Moissan in 1886. Fluorine information, including technical data, properties, and other useful facts are specified below. Scientific facts such as the atomic structure, ionization energy, abundance on Earth, conductivity and thermal properties are included.

Fluorine is a pale yellow gas with a pungent odor. It is commonly shipped as a cryogenic liquid. It is toxic by inhalation and skin absorption. Contact with skin in lower than lethal concentrations causes chemical burns. It reacts with water to form hydrofluoric acid and oxygen. It is corrosive to most common materials. It reacts with most combustible materials to the point that ignition occurs. Under prolonged exposure to fire or intense heat the containers may violently rupture and rocket. Safety data for Fluorine and its compounds can vary widely depending on the form. For potential hazard information, toxicity, and road, sea and air transportation limitations, such as DOT Hazard Class, DOT Number, EU Number, NFPA Health rating and RTECS Class, please see the specific material or compound referenced in the Products tab.

Fluorine has one stable isotope: 19F.