Ytterbium Trifluoromethanesulfonate is one of numerous organo-metallic compounds (also known as metalorganic, organo-inorganic and

In its elemental form, ytterbium has a silvery-white color. Ytterbium is found in monazite sand as well as the ores euxenite and xenotime. Ytterbium is named after Ytterby, a village in Sweden. Ytterbium can be used as a source for gamma rays, for the doping of stainless steel, or other active metals. Its electrical resistivity rises under stress, making it very useful for stress gauges that measure the deformation of the ground in the even of an earthquake. 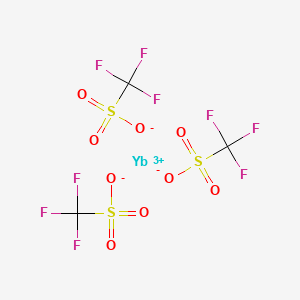