Sodium Trifluoroacetate-1-13C2 is one of over 200 stable isotope-labeled materials produced by American Elements for biological and biomedical labeling, as target materials and other applications. Sodium Trifluoroacetate-1-13C isotopic material is available with various enrichment levels. American Elements produces to many standard grades when applicable, including Mil Spec (military grade); ACS, Reagent and Technical Grade; Food, Agricultural and Pharmaceutical Grade; Optical Grade, USP and EP/BP (European Pharmacopoeia/British Pharmacopoeia) and follows applicable ASTM testing standards. Typical and custom packaging is available. Please request a quote above to receive pricing information based on your specifications.

Simultaneously enhanced intracellular lipogenesis and β-carotene biosynthesis of Rhodotorula glutinis by light exposure with sodium acetate as the substrate. 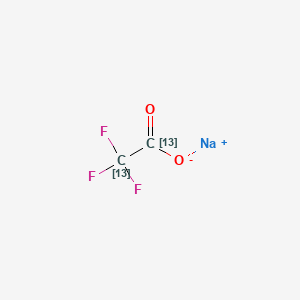