235-657-4
View the history of American Elements on Wikipedia

The number of electrons in each of Beryllium's shells is [2, 2] and its electron configuration is [He] 2s2. The beryllium atom has a radius of 112 pm and a Van der Waals radius of 153 pm. Beryllium is a relatively rare element in the earth's crust; it can be found in minerals such as bertrandite, chrysoberyl, phenakite, and beryl, its most common source for commercial production. Beryllium was discovered by Louis Nicolas Vauquelin in 1797 and first isolated by Friedrich Wöhler and Antoine Bussy in 1828.

In its elemental form, beryllium has a gray metallic appearance. It is a soft metal that is both strong and brittle; its low density and high thermal conductivity make it useful for aerospace and military applications. It is also frequently used in X-ray equipment and particle physics. The origin of the name Beryllium comes from the Greek word "beryllos," meaning beryl.

Coexistence of Superconductivity and Superhardness in Beryllium Hexaboride Driven by Inherent Multicenter Bonding.

Magnesium diboride (MgB2) as a saturable absorber for a ytterbium-doped Q-switched fiber laser.

Enhancement of photoelectrochemical oxidation by an amorphous nickel boride catalyst on porous BiVO. 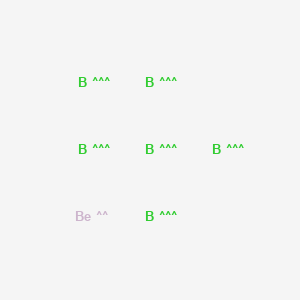