Cerium Acetylacetonate is a cerium source that is soluble in organic solvents as an organometallic compound (also known as metalorganic, organo-inorganic and metallo-organic

compounds). The high purity acetylacetonate anion complexes by bonding each oxygen atom to the metallic cation to form a chelate ring; because of this property, acetylacetonates are commonly used in various catalysts and catalytic reagents for organic synthesis, including the fabrication of various shapes of carbon nanostructures (as demonstrated by a 2013 experiment by researchers at the Leibniz Institute for Solid State and Materials Research Dresden) via the use of chemical vapor deposition (CVD) and laser evaporation techniques. It is generally immediately available in most volumes. Ultra high purity and high purity forms may be considered. Cerium Acetylacetonate is one of numerous organo-metallic compounds (also known as metalorganic, organo-inorganic and metallo-organic compounds) sold by American Elements under the trade name AE Organo-Metallics™ for uses requiring non-aqueous solubility such as recent solar energy and water treatment applications. Similar results can sometimes also be achieved with Nanoparticles and by thin film deposition. Note American Elements additionally supplies many materials as solutions. The numerous commercial applications for Cerium include metallurgy, glass and glass polishing, ceramics, catalysts, and in phosphors. In steel manufacturing it is used to remove free oxygen and sulfur by forming stable oxysulfides and by tying up undesirable trace elements, such as lead and antimony. It is considered to be the most efficient glass polishing agent for precision optical polishing. American Elements produces to many standard grades when applicable, including Mil Spec (military grade); ACS, Reagent and Technical Grade; Food, Agricultural and Pharmaceutical Grade; Optical Grade, USP and EP/BP (European Pharmacopoeia/British Pharmacopoeia) and follows applicable ASTM testing standards. Typical and custom packaging is available. Additional technical, research and safety (MSDS) information is available as is a Reference Calculator for converting relevant units of measurement.

Development and characterisation of polymeric microparticle of poly(d,l-lactic acid) loaded with holmium acetylacetonate.

A luminescent cerium metal-organic framework for the turn-on sensing of ascorbic acid. 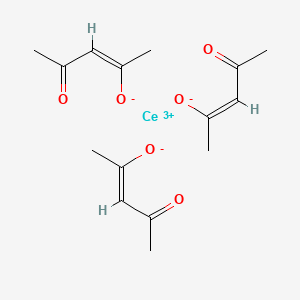