Barium Zirconate Titanate (BZT) is a piezoelectric ceramic composed of a solid solution of barium titanate and barium zirconate with applications as a dielectric and ferroelectric material in electronic and semiconductor devices.

In its elemental form, barium is a soft, silvery-gray metal. Industrial applications for barium include acting as a "getter," or unwanted gas remover, for vacuum tubes, and as an additive to steel and cast iron. Barium is also alloyed with silicon and aluminum in load-bearing alloys. The main commercial source of barium is the mineral barite (BaSO4); it does not occur naturally as a free element . The name barium is derived from the Greek word "barys," meaning heavy.

The number of electrons in each of Zirconium's shells is 2, 8, 18, 10, 2 and its electron configuration is [Kr]4d2 5s2. The zirconium atom has a radius of 160 pm and a Van der Waals radius of 186 pm. Zirconium was discovered by Martin Heinrich Klaproth in 1789 and first isolated by Jöns Jakob Berzelius in 1824. In its elemental form, zirconium has a silvery white appearance that is similar to titanium. Zirconium's principal mineral is zircon (zirconium silicate).

The Effect of Acceptor and Donor Doping on Oxygen Vacancy Concentrations in Lead Zirconate Titanate (PZT). 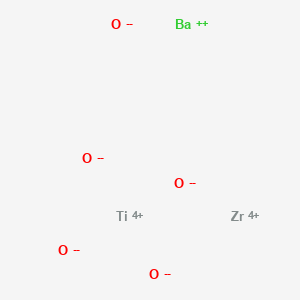