Tris(acetonitrile)pentamethylcyclopentadienylrhodium(III) hexafluoroantimonate is one of numerous organo-metallic compounds sold by American Elements under the trade name AE Organo-Metallics™ for uses requiring non-aqueous solubility such as recent solar energy and water treatment applications. Similar results can sometimes also be achieved with Nanoparticles and by thin film deposition. Note American Elements additionally supplies many materials as solutions. Tris(acetonitrile)pentamethylcyclopentadienylrhodium(III) hexafluoroantimonate is generally immediately available in most volumes. High purity, submicron and nanopowder forms may be considered. Additional technical, research and safety information is available.

The Fischer-Tropsch reaction in the aqueous phase over rhodium catalysts: a promising route to selective synthesis and separation of oxygenates and hydrocarbons.

Porous organic polymer supported rhodium as a heterogeneous catalyst for hydroformylation of alkynes to α,β-unsaturated aldehydes. 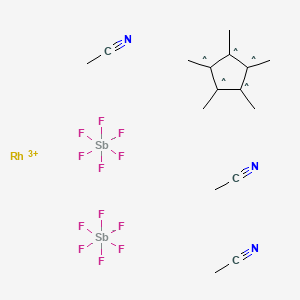