[Tris(dimethylphenylphosphine)](2,5-norbornadiene)rhodium(I) hexafluorophosphate is one of numerous organo-metallic compounds sold by American Elements under the trade name AE Organo-Metallics™. Additional technical, research and safety information is available.

Preparation of Rhodium(III) complexes with 2(1H)-quinolinone derivatives and evaluation of their in vitro and in vivo antitumor activity. 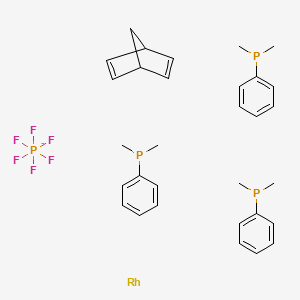