C40H56Cl3N3Pd
View the history of American Elements on Wikipedia

PEPPSI-IPent (Pd-PEPPSI-IPent, 1,3-bis[2,6-di(pentan-3-yl)phenyl]imidazole;3-chloropyridine;dichloropalladium) is an organometallic palladium catalyst for numerous cross-coupling reactions including Kumada-Tamao-Corriu (KTC), Buchwald-Hartwig amination,, Suzuki coupling, and Negishi coupling. PEPPSI, an acronymn for pyridine-enhanced precatalyst preparation stabilization and initiation, also describe the structures of a specific set of palladium catalysts developed in the 2000s that are air and moisture stable. Please request a quote above for more information on pricing and lead time. 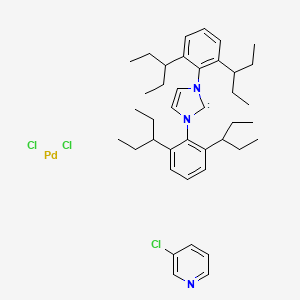